What Is It That We Do in Honbu?

This is the English version of the post Mitä Honbussa tehdään?

This post will once again be a list of things. This time, the subject is the things that we do in Honbu. They can be described at several levels, but for this post I selected the two clearest ones. Answers to what martial arts are practiced at Honbu are answered on the honbu.fi page. (Click saver: All of the fun ones.)

There are five things on Honbu’s agenda that should be found in every training. The list has been developed by Jyrki Innanen, and it goes like so:

Safety
This is always the first thing on the list. In Honbu we use a variety of protective equipment depending on the type of the execrise, but in addition, safety is promoted through communication, safe techniques, and safety instructions that are essential to listen to if you want to practice in Honbu.

Having Fun
This is also particularly important to us. In Honbu, we train with friends - on the tatami, there are no opponents, just practice buddies. You are allowed to laugh and have fun while training, and making new friends is not forbidden. While our black belts can occasionally look grave-serious and aggressive when practicing, it’s usually just because they are concentrating - a focused and a serious looks look roughly the same when your mouth is full of mouth guard!

Martial Practicality
The karate practiced in Honbu is both combat-sporty and self-defence-y. In every session, the aim is to bring in realistic elements, for example in the form of sparring or Uncle Reino simulations (you'll learn all about that later). In general, this means that in Honbu, we rarely practice with much rigor any fancy trick kicks or other such techniques, which look spectacular but are impractical in a sports fight or self-defense situation. Sometimes we do them for fun, and we call them "ninja techniques".

Physical Activity
A practice session in Honbu is also a workout. You are meant to sweat and breathe heavier, even just a little bit. But in Honbu, it's pretty fun and very rewarding. However, this does not mean that there is a fitness limit for training at Honbu - as I said in a previous post, fitness does increase along with training, and you don't even need to try. You do everything at your own level, and if you cap out, you can rest until you regain your strength.

Community
Honbu is a community. We aim to train in a friendly atmosphere, and on Fridays we go for a beer in the local bar. Occasionally there are all sorts of other social events, like movie nights, game nights and such. Even in the midst of a getting a beatdown, the Honbulans consider it important that no one feels bad about it. This element supports all other elements by pulling the trainers together. Karate is perhaps an individual sport, but its practice is group work. 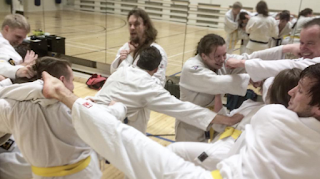 There are four ways we practice karate in Honbu. This was the brain child of mine, and it goes like so:

Basic Technique
This is when you stand in line and hit the air as the teacher shouts numbers. Basic technique teaches power generation, concentration, and correct trajectories, among other things. Doing an abstract version of a technique into the air makes it easier for the teacher to see if you are doing something right - and, with the help of a mirror or a video camera, to yourself as well. An important part of basic technique (and kata) is learning to visualize an attacker. It helps in understanding where a hit is supposed to land, where to aim, and what kind of attacks the blocks are going to work on. Basic technique is most definitely interesting, and very difficult to master.

Kata
Kata is a bit like basic technique, but without the teacher traditionally shouting numbers. A kata is a series of movements (punches, kicks, blocks, chokes, etc.) that are performed in a specific order. In different karate styles, kata look different. In Koryu uchinad, kata is supposed to look strong and effective without unnecesary pauses or posturing.

Kata develops the same things as basic technique, but in a more dynamic context. It is an exercise for holistic body control. Especially the transitions from one technique to another, which are often not practiced when doing basic techniques, develops your intuition on what will work from which positions. It is told that originally kata was a way to practice karate when a training partner was not available, but it also serves as a handy mnemonic device for practicing a lot of different stuff in one go.

Pair Exercises
Pair exercises include futari geikos, kihon oyo jutsu, goshin jutsu and tegumi* - things that are done with a partner. In most cases, both the attack and the defence are predetermined, and the point is to drill some specific technique. However, this is not always the case - in goshin jutsu, for example, an attack can be either from a selection of a few options, or whatever comes to mind, and the defender is allowed any defence (or a defence from a selection of a few) that achieves the goal of the exercise. When the attacks and defences are not specified, it is called sparring or simulating.

Pair exercises teach, among other things, how to use strength (both how to produce and how to control), which techniques you should apply and when, and how your own or your partner's body behaves in certain situations. Pair exercises can be done at several resistance levels, each with its own benefits. Most importantly, however, there are different levels of threat, and the response has to be to the same scale as the threat.

*) "That's a lot of Japanese, I don't speak that!"
- Don't you worry, you don't need to understand those terms just yet. However, if you wish to nerd out a bit, the koryu uchinadi specific vocabulary's Englsih translation is underway, and you can soon read that too!

Sparring/Simulating
Sparring is when two (or more!) people agree to fight each other. Sparring as a training exercise develops adaptability, reflexes, distance control, and timing, and is the closest way to simulate a natural struggle situation. When this free-form practice is done with self-defence situations, it's called simulating. Without sparring/simulating, you will never hope to learn to actually apply a technique under pressure. Sparring can be practiced at different degrees of contact and speed - the variations are nigh endless. Contact, of course, refers to how much punches and kicks are controlled - how hard they are. Light sparring is especially useful in the early stages, when a beginner is still learning to manipulate even their own body, let alone another person’s body.

To move on to sparring harder, you need to accept the fact that you are also going to get hit harder. However, in Honbu, we never have full contact to the head.

In Honbu, there's never any need to spar any harder than you want to. When sparring with a partner, you negociate the contact level before you begin, and if you don't agree, the compromise contact level is always exactly as hard as the person who wants to go lighter, wishes.

Karate in Honbu can be categorized in other ways, but these are the easiest to understand, and the most important ones. During the basic course, you don't need to bother too much with categorizing everything, but focus on having fun and learning safe training.

I wish you unclassified joy of training!